A monthslong logjam of cargo ships at Southern California’s ports appears to be easing even as imports continue to flood the major U.S. trade gateway.

“We are making progress,” Port of Los Angeles Executive Director Gene Seroka said Wednesday. “Today we have half the number of anchorage ships that we reported at the peak in February.”

The shipping traffic jam, part of a broader gridlock in supply chains around the world amid disruptions from the coronavirus pandemic, is thinning while record cargo volumes are landing in the U.S.

The ports of Los Angeles and Long Beach, which together handle more than a third of all U.S. seaborne imports, saw their busiest March on record, handling a combined 898,287 loaded container imports, measured in 20-foot equivalent units, or TEUs. That was up 97.1% from the same month last year, when the Covid-driven shutdown of factories in China depressed shipping volumes, but also 65.1% ahead of the more normal March 2019 imports.

The surge at the California ports is part of a broader deluge of imports that has hit U.S. ports as businesses restock inventories that were depleted early in the pandemic and to meet resurgent consumer demand.

Trade data group Panjiva said in a report Tuesday that U.S. seaborne imports of containerized freight surpassed 3 million TEUs last month, 50.5% more than the same month last year and 36.9% ahead of the more normal March 2019 level. Container imports of leisure products and home furnishings nearly doubled the level of two years ago, said the group, which is part of S&P Global Market Intelligence.

“As more Americans get vaccinated, businesses reopen and the economy strengthens, consumers continue to purchase goods at a dizzying pace,” Mr. Seroka said.

There were 23 container ships waiting offshore to dock at Los Angeles and Long Beach on Tuesday, according to the Marine Exchange of Southern California, which monitors ship traffic in the region. That was down from a peak of about 40 waiting vessels in February, and the group said the flow of ships to berths was picking up.

The arrival of so much cargo has been straining inbound supply chains fanning out from the ports.

The waiting time to load containers on trains out of Los Angeles reached 11 days this week from a normal yearly average of around two days, according to port officials. “The rapid succession of vessel calls, inclement weather across the country and the one-way trade surge make it difficult to get railcars back to Los Angeles fast enough,” said Mr. Seroka.

Container volumes are expected to continue to be strong into the summer. The port expects box volumes to rise 28% from last year in April and 45% in May.

Volumes heading into Western countries have surged since last summer, even as suppliers of trucks and containers have struggled with capacity shortages.

Liner operators say there isn’t enough capacity in the water to handle the demand.

“At this point we need to add one or two more ships in our weekly services,” said Rolf Habben Jansen, the chief executive of German container line Hapag Lloyd AG .

Hapag-Lloyd expects the bottlenecks to ease in the third quarter.

The backlogs have left many retailers waiting weeks for goods stuck on ships at sea or at the port, hitting small- and medium-size companies with lean operations particularly hard.

Michael Murray, who runs DeSales Trading Co., a threads and yarns wholesaler in Burlington, N.C., has been scrambling to secure both containers and supplies from China for about a year. He has been getting emails from suppliers warning him that they won’t be able to fulfill his orders and that prices will go up.

“At the end of the day if you are a manufacturer who subscribes to the just-in-time supply chain concept or if you are not flexible, you are screwed,” Mr. Murray said. 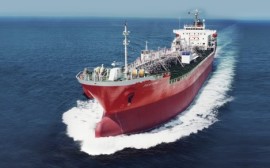