In the ‘Three Card Trick’ or game of ‘Find The Lady’ beloved by hustlers everywhere, the aim is to track the movement of one item amongst three, but blink and you’ll miss it! Shipping’s orderbook appears to have its own version of this pastime, with the three largest shipowning nations, in terms of the volume of tonnage on order, swapping places frequently.

Are You Watching Closely?

Today, Japanese owners account for the largest orderbook across all owner nationalities, with 488 ships (100 GT and above) of 28.2m GT on order. This year, the size of their orderbook has surpassed that of their Chinese counterparts, leaving Japanese owners on top of this particular pile. At the same time the Japanese own the world’s second largest fleet (164.2m GT) behind Greek owners (210.1m GT). This change is the latest in a recent set of switches in the leadership of ownership of the global orderbook.

Following the boom in ordering preceding the global economic downturn, the orderbook stood at its highest ever level (416.6m GT) in October 2008. At this point in time it was Greek owners who accounted for the largest orderbook, and by some margin, 56.5m GT, ahead of the German owners in second place with 41.4m GT (today this has dwindled to just 3.3m GT). Since then, things have largely gone one way for the Greek orderbook. Today it stands at 14.7m GT, 74% smaller than back in October 2008, and it is the third largest in the world. The Greek fleet has meanwhile maintained a healthy degree of expansion, with net asset play gains adding firmly to deliveries.

By start 2011 the Chinese owners’ orderbook was the world’s second largest and across the period 2012-15 it vied with the Greek orderbook for pole position before pulling ahead last year. Ordering, often state-backed, and significantly at Chinese yards, propelled the Chinese orderbook to become the world’s largest by October 2015, and today it stands at 24.8m GT (17% of the Chinese fleet), still close to the largest in dwt terms (39.1m dwt).

So, against the background of a declining orderbook since 2008, the Japanese orderbook has switched from third to first position. But it’s still close and the Chinese orderbook is just 3.4m GT smaller today. Contracting has been extremely limited last year and this year so far, but at some point it will come back in greater volumes and then it will be necessary to watch the movements in the orderbook even more intently. Have a nice day. 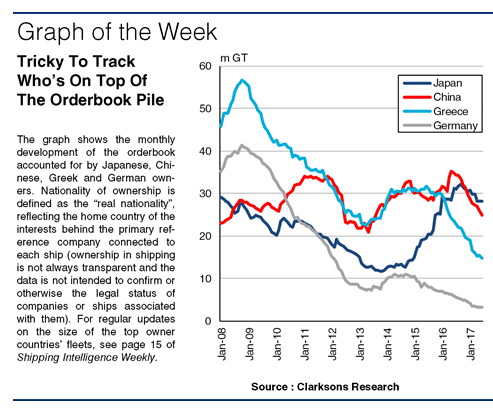