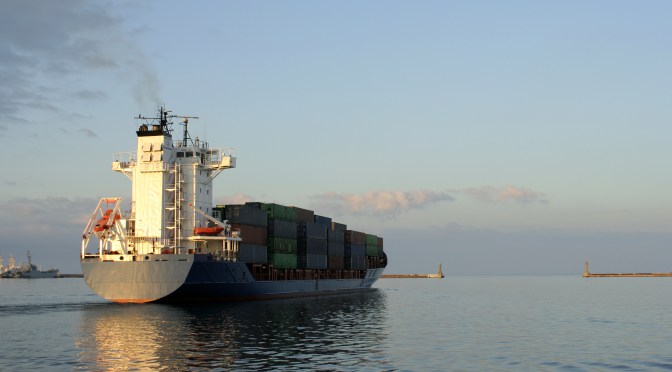 The global shipping industry is bracing for a key regulatory decision that could mark a milestone in reducing maritime pollution, but which could nearly double fuel costs in a sector already reeling from its worst downturn in decades.

The shipping industry is by far the world’s biggest emitter of sulfur, with the SOx content in heavy fuel oil up to 3,500 times higher than the latest European diesel standards for vehicles.

To combat such pollution, the International Maritime Organization’s (IMO) Marine Environment Protection Committee will meet in London on Oct. 24-28 to decide whether to impose a global cap on SOx emissions from 2020 or 2025, which would see sulfur emissions fall from the current maximum of 3.5 percent of fuel content to 0.5 percent.

“One large vessel in one day can emit more sulfur dioxide than all the new cars that come onto the world’s roads in a year,” said Thomas Koniordos, head of business line environmental solutions at Norway’s Yara International.

Large container ships of 15,000-18,000 TEUs (20-foot equivalent units) consume up to 300 tonnes of high-sulfur fuel a day at sea, while a 300,000 deadweight tonne (DWT) supertanker guzzles up to about 100 tonnes per day. Health experts say sulfur is responsible for deadly heart and lung diseases.

The issue has been brewing for more than a decade and shippers said the industry was now bracing for tighter regulation to be introduced sooner rather than later due to political pressure.

“The decision will likely be a political one – the European Union is pressing strongly for 2020,” said Arthur Bowring, managing director of the Hong Kong Shipowners’ Association.

The European Union has already agreed that the 0.5 percent sulfur requirement will apply in 2020 within 200 nautical miles (370 km) of EU Member States’ coasts, regardless of what the IMO decides.

Authorities in Shenzhen, the world’s third biggest container port, introduced tighter controls this month, demanding that ships calling there do not use fuel with a sulfur content of more than 0.5 percent.

Ship owners can comply with the tighter controls either by switching away from the sludgy and sulfur-rich so-called bunker fuels to diesel or liquefied natural gas (LNG), or by fitting scrubbers to clean exhaust emissions.

A fuel-switch would impose extra costs on an already troubled shipping sector, which has seen high-profile defaults like South Korea’s Hanjin as well as cases of stranded ships with crew left onboard ships unpaid and unsupplied.

Using low-sulfur diesel instead of bunker fuel on a very large crude carrier (VLCC) class supertanker would boost fuel costs by around 44 percent from an average of $212 per tonne this year for heavy fuel oil to $379 per tonne for gas oil, according to figures from shipping broker Clarkson.

For traded oil markets, the shift to low-sulfur fuel will “substantially reduce demand for bunkers in the run up to 2020 and increase demand for gasoil and alternative fuels including LNG,” said Christopher Haines, head of oil and gas at BMI Research.