Shipping’s Half Year Report – Any Better This Year? In last year’s half year shipping report, we reported on an industry that “must do better”.

With the ClarkSea Index averaging $10,040 per day in the first half (up 2% y-o-y but still 14% below trend since the financial crisis) there are still many subjects (sectors) struggling for good grades as our Graph of the Week shows. But are there some that are showing a bit more potential?

Don’t Rest On Your Laurels!

A year on from record lows, bulker earnings remain below trend (defined as the average since the financial crisis) but are showing signs of improvement. Capesize spot earnings moved from an average of $4,972/day in 1H 2016 to $13,086/day (75% below trend versus 33% below trend). Indeed, based on the first quarter alone, Panamax earnings moved above trend for the first time since 2014 and we have certainly seen lots of S&P activity. The containership sector has responded to the Hanjin bankruptcy with another wave of consolidation (the top ten liner companies now operate 75% of capacity) and some improvements, albeit with lots of volatility, in freight rates. Improved volumes, demolition and the re-alignment of liner networks, helped improve charter rates and indeed feeder containerships rates have moved above trend for the first time since 2011. Although some gains have been eroded moving into the summer, fundamentals for both these sectors suggest improvements in coming years but it may be a bumpy road!

After solid marks in last year’s reviews, the tanker sectors tracked here have moved into negative territory compared to trend, with the larger ships feeling the biggest correction as fleet growth, particularly on the crude side, remains rapid and oil trade growth slows. Aside from a small pick-up in the LNG market in recent weeks, the gas markets remain weak, with VLGC earnings 42% below trend. Some increased activity, project sanctioning and investor interest has not yet taken offshore off the “naughty step” .

Still Top Of The Class?

The only sector significantly above trend for the first half is Ro-Ro, with rates for a 3,500lm vessel averaging euro 18,458/day, 42% above trend. There also continues to be strong interest in ferry and cruise newbuilding (the 2 million Chinese cruise passengers last year, now 9% of global volumes, is supporting a record orderbook of USD 44.2bn, as is the interest in smaller “expedition” ships). We must also give a mention to S&P volumes that are 60% above trend (51m dwt, up 50% y-o-y) and to S&P bulker values which improved 25% in the first quarter alone.

Upward revisions to trade estimates have been a feature of the first half, and we are now projecting full year growth of 3.4% (to 11.5bn tonnes and 57,000bn tonne-miles). Although demolition has slowed (down 55% y-o-y to 16m dwt), overall fleet growth of 2.3% is still below trend but an increase on 1H 2016 (1.6%). While there has been some pick-up in newbuild ordering to 24m dwt (up 27% y-o-y), this remains 52% below trend. Last year we speculated on an appointment with the headmaster – still possible but perhaps this year extra classes on regulation and technology? Have a nice day. 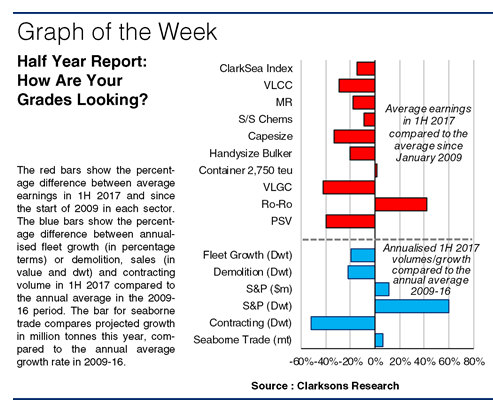