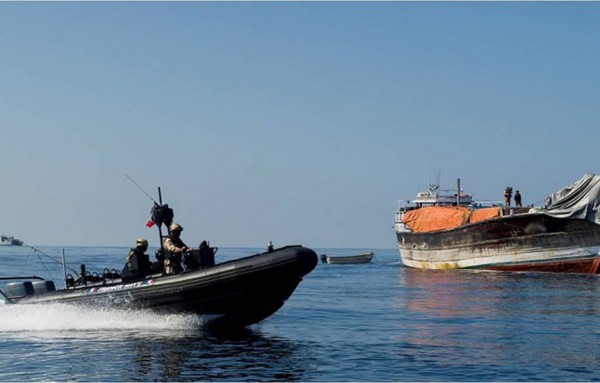 More than 40 percent of the world’s seaborne oil supplies pass through the Gulf of Aden and Arabian Sea, a major shipping lane also used to move exports and commodities such as food between Asia and Europe.

The European Union’s counter-piracy naval force (EU Navfor) confirmed on Nov. 4 that six armed men attacked chemical tanker CPO Korea 330 nautical miles (610 km) east of Somalia on Oct. 22, the first reported attack on a major vessel off the country for two and a half years.

The last reported attack was in February 2014 and involved a container ship which came under fire from gunmen in waters near Somalia, EU Navfor said.

On Oct. 25, assailants opened fire on a gas tanker off Yemen. The tanker’s owner said the gunmen had a “substantial amount of explosives” and one maritime source told Reuters it may have been an attempted suicide attack.

Northwood, a former Royal Navy captain, said that after a period of relative calm some shipping firms were underestimating the threat and using poorly trained and equipped security teams, “more used to calm waters than the genuine risk of attack.”

In the first incident, EU Navfor said suspected pirates in a high-speed boat exchanged fire with guards aboard the tanker, which escaped without casualties after accelerating, altering course and using fire hoses to thwart the attack.

“This attack shows that pirates still have the intent to attack ships for ransom and cause misery to seafarers and their families,” EU Navfor Operation Commander Rob Magowan said.

Attacks in the Gulf of Aden and Indian Ocean escalated in 2008 and by 2011 more than 700 hostages and 30 vessels were being held by Somali gangs who demanded millions of dollars in ransoms.

Since then, the deployment of armed security guards on ships with a mandate to respond robustly combined with pre-emptive strikes by naval forces and more protective measures on vessels helped cut attacks to just two in 2014 and zero last year.

Besides the EU naval force, the United States, South Korea, Iran and other nations all deployed ships in the wake of the surge in piracy to halt a business that was costing the world economy billions of dollars a year at its peak.

A report by the United Nations last month, however, said progress on combating piracy remained “fragile and reversible.”

The report said political instability in the central region of Somalia, together with the finite mandate of the international naval force, “has the potential to become a security vacuum that could trigger a resurgence of piracy.”

The world’s biggest container shipping line, Maersk , said it was closely following the situation, adding that piracy “was a challenge we have to address.”

A week-old ceasefire between the Somali regions of Galmudug and Puntland, both areas where pirate gangs used to operate, broke down on Sunday and fighting over their disputed border has killed at least 29 people.

“There have been reports of pirate groups being organized and equipped in Mudug and in the area in the Horn of Africa east of Bosasso in Puntland,” the UN report said.

EU Navfor’s Magowan said it was coordinating efforts with counter-piracy partners to ensure “pirates do not once again terrorize the waters off the Somali coast.”

In a special note on its website, the U.S. Office of Naval Intelligence (ONI) also warned mariners sailing through the Red Sea, Bab-al Mandab and Gulf of Aden to operate “under a heightened state of alert.”

“Increasing tensions in the region escalate the potential for direct or collateral damage to vessels,” the ONI said.

A suicide bombing by al Qaeda, which has a powerful regional arm in Yemen, killed 17 sailors on the U.S. warship Cole in Aden’s port in 2000. Two years later, al Qaeda hit a French tanker in the Gulf of Aden, south of the Bab al-Mandab.

“There seems to be fresh ambition to inflict major damage on a ship that we have not seen since 2002,” one maritime source said.