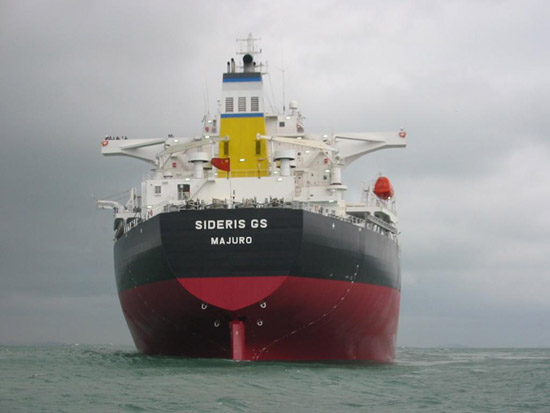 Revenues, net of voyage expenses totaled $108.2 million, approximately $8.5 million more than in the first quarter of 2016, in part due to the delivery of new vessels.

Fleet utilization of 97.2% contributed to higher revenue. TEN has maintained a 95% plus utilization consistently. A remarkable accomplishment in a cyclical industry.

Since the beginning of 2017, TEN has taken delivery of four vessels, namely the VLCC HerculesI in January, the aframax crude carriers Marathon TS and Sola TS in February and April respectively, and its third shuttle tanker, the DP2 Lisboa in March, which started its time-charter in May, 2017.

Depreciation and dry-docking amortization costs increased by $6.1 million due to the introduction of new vessels into the fleet. No vessels were disposed of during the period, although there remains an expectation to sell certain older, for TEN’s standards, vessels during the course of the year.

Average daily operating costs per vessel decreased by 4% to $7,584 from $7,890 in the first quarter of 2016, mainly as a result of cost effective operations by our affiliated technical managers.

TEN’s daily average overhead expense per vessel was reduced by 5% to $1,139. G&A fell 12% from the first quarter 2016, mainly due to reduced promotional and miscellaneous expenses.

Interest and finance costs totaled $11.9 million, an increase over the first quarter of 2016 mainly due to reduced capitalized interest upon the completion of new vessels, increased indebtedness due to those new vessels and increases in the LIBOR rate, offset partly by gains on interest rate swaps.

Cash balances amounted to $160.1 million as of March 31, 2017. TEN’s balance sheet has been further strengthened with $115.0 million gross proceeds from an offering of preferred shares which closed in April.

Net debt to capital at March 31, 2017 was 54%. Earnings before interest, depreciation and amortization (EBITDA) in the first quarter of 2017 amounted to $61.6 million. All vessels generated a positive EBITDA, except for two vessels undergoing dry-docking in the period.

“TEN posted another profitable quarter in a challenging market environment. This is the best proof of management’s performance in executing a clearly defined strategy that takes into account the numerous and very complex parameters at play. Prudence and early preemptive action, together with ever increasing efficiency in managing costs, allows TEN to produce steady sustainable earnings and best in class results,” Mr. Takis Arapoglou, Chairman of the Board stated. “This has been a steady pattern throughout the 24 years since TEN’s inception, allowing it to navigate effectively and efficiently through all business cycles, to consistently reward its shareholders, while adhering to strict corporate governance guidelines and adapting to evolving regulatory environments. Today, TEN has a fleet of 65 modern vessels, covering the whole spectrum from conventional crude and product tankers to higher value added DP shuttle tankers and LNG carriers. This unique fleet profile reflects TEN’s strategy to offer one platform serving all the needs of its prestigious client base. This new industrial model ensures stability, sustainable earnings and continued value creation for the shareholders,” Mr. Arapoglou concluded.

The Company will pay a dividend of $0.05 per common share on July 14, 2017 to shareholders of record as of July 11, 2017. Inclusive of this payment, TEN will have distributed a total of $10.51 per share in uninterrupted dividends to its common shareholders since the Company’s listing on the NYSE in March 2002.

As expected, oil barrels from Nigeria, Libya, Iran and the rejuvenation of the US shale industry is filling the void the OPEC (and non-OPEC) cuts have created in the markets. As a result, oil prices continue to remain at attractive levels to stimulate global demand and by extension seaborne tanker trade. With oil prices at attractive levels and a low orderbook environment, we expect a long term upward momentum in freight rates. TEN, with the majority of the fleet in secured and flexible contracts and a notable presence in the spot market, would be a prime beneficiary of this expected uplift.

In line with the programmed deliveries, in January 2017 the VLCC Hercules I was delivered from Hyundai Heavy Industries in South Korea and was subsequently chartered for a period of up to 18 months. In February and April 2017, the aframax tankers MarathonTS and Sola TS were delivered from Daewoo Mangalia Heavy Industries, the fifth and sixth in a series of nine aframaxes built against long-term contracts. In March 2017, the Company took delivery of its third DP2 shuttle tanker Lisboa from Sungdong Shipbuilding in South Korea. The vessel was built against an eight year contract, with an option to extend to eleven years. In addition, the Company recently initiated a strategic partnership with a major US oil company starting with the chartering of three suezmaxes and one VLCC.

TEN’s 15-vessel newbuilding program is nearing completion with the final three aframax tankers expected to be delivered in the coming months. In the second half of the year, with all vessels delivered and 77% of the fleet on full utilization contracts, TEN’s industrial shipping strategy will be at full throttle.