The Pattern Of Past Market Cycles â€“ Fact or Fantasy? For shipping investors, questions about buying, selling, or maybe cashing out are always present.

And the trigger is, of course, the market cycle. But if history is any guide, the market can play tricks on over-enthusiastic investors and sometimes it turns out that the modest upswing on the way to a sustained better market turned out to be the peak of the boom.

A Matter Of Perspective

Take a look at the Clarksea Index in the 1990s (the blue line in the graph). Earnings peaked in 1990, slumped in 1992, and then by 1995 edged up to a reasonable but unexciting $14,000/day. At the time the market thought this was the end of the beginning, but it turned out to be the beginning of the end. In 1997 along came the Asia Crisis which zapped demand. By 1999 the earnings had slumped below $10,000/day, a deep recession. The 1990s turned out to be generally disappointing. Booms were short, patchy and unpredictable, generating insufficient earnings to pay for losses during the longer spells of soggy rates.

What Does It Mean?

First letâ€™s take a closer look at what the second half of the 1990s was like. Basically things did not improve. By 1999 the Clarksea Index was below $10,000/day and average earnings in the five years to start 2000 were less than $12,000/day. In September 1999 market sentiment was at rock bottom. Even diehard optimists were pessimistic. But this was absolutely the best buying opportunity in the last 50 years, especially for new bulkcarriers.

So maybe â€œwhen will the market recover?â€ is the wrong question for today. If the 1990s is any guide the answer might be â€œdonâ€™t hold your breathâ€. And the fundamentals could be interpreted to support this view. With a young fleet, shipyard capacity still in apparent surplus, a wobbly world economy with China, the growth driver, searching for its ball in the long grass, and seaborne trade growth down near 2%, this looks uncomfortably like the 2010s version of the 1990s. A chilling thought.

Ignore At Your Peril?

So there you have it. The close correlation of the last five years could just be a coincidence. But it raises questions investors cannot ignore; they must decide whether the correlation with the 1990s will continue. The fundamentals suggest it is one plausible scenario. And the follow on question is â€œwill the industry emerge from the 2010s with the same decisive momentum it left the 1990s?â€ Now that would be worth the wait. Have a nice day. 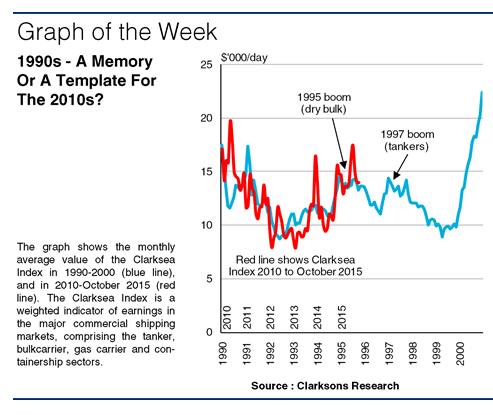