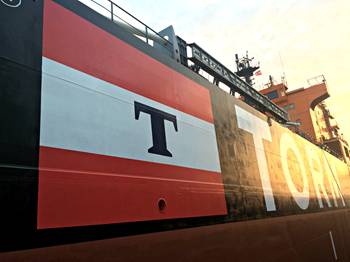 “Having experienced a seasonally softer freight rate environment in the third quarter of 2019, the product tanker market has strengthened significantly going into the fourth quarter. As the demand and supply balance tightens towards the upcoming IMO 2020, individual events have caused spikes in product tanker freight rates to levels last seen in 2008,” says TORM Executive Director Jacob Meldgaard and adds: “For the fourth quarter, our bookings as of 8 November 2019 were at USD/day 19,531 reflecting the strong market we are currently operating in.”

• The four recently acquired 2011-built MR vessels providing total proceeds of USD 66m. The transaction was executed with a Chinese counterparty and includes a purchase obligation in 2025.

• The MR vessels TORM Alice and TORM Alexandra (both 2010-built) providing total proceeds of USD 35m. In connection with the transaction, USD 21m of debt was repaid. The transaction was executed with a Japanese counterparty and includes purchase options in 2024 and 2026 for both vessels.

In total, TORM has executed sale and leaseback transactions for eight vessels during the third quarter of 2019, all with terms supporting TORM’s solid capital structure.

• As of 30 September 2019, TORM’s available liquidity was USD 337.0m consisting of USD 120.8m in cash and cash equivalents and USD 216.2m in undrawn credit facilities. As of 30 September 2019, net interest-bearing debt amounted to USD 732.5m and TORM’s net loan-to-value (LTV) ratio was 50%. Cash and cash equivalents include USD 14.5m in restricted cash, primarily related to security placed as collateral for financial instruments.

• Based on broker valuations, TORM’s fleet including newbuildings had a market value of USD 1,720.4m as of 30 September 2019. Compared to broker valuations as of 30 June 2019, the market value of the fleet increased slightly by USD 2m when adjusted for sold and purchased vessels. The book value of TORM’s fleet was USD 1,586.4m as of 30 September 2019 excluding outstanding installments on newbuildings of USD 137.5m. The outstanding installments include payments for scrubbers related to these vessels. TORM also has CAPEX commitments of USD 31.7m for retrofit scrubber installations. In addition, USD 12m relating to six additional scrubbers was committed after the quarter ended. As of 30 September 2019, TORM’s order book stood at five newbuildings consisting of two LR1 and three MR vessels. The newbuildings are expected to be delivered in the fourth quarter of 2019 and the first quarter of 2020.