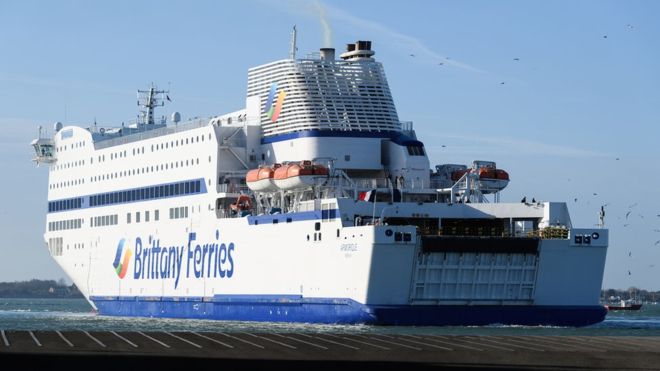 The government’s Brexit ferry programme was “rushed and risky”, according to a cross-party group of MPs, who confirmed the botched project had cost £85m.

A procurement process to provide extra ferry services was held in anticipation of the UK leaving the EU on 29 March.

But MPs said taxpayers had “little to show” for the cost after the UK failed to leave the EU on that date and had to cancel deals reached with three firms.

The government defended the contracts, calling them an “insurance policy”.

The contracts had to be cancelled after the date for Britain to leave the EU was pushed back from 29 March to 31 October.

The Public Accounts Committee report confirmed that cancelling the contracts with Seaborne Freight, DFDS and Brittany Ferries had cost the Department for Transport (DfT) £51.4m.

The DfT also had to pay a £33m settlement with Eurotunnel after the group said it was excluded from the tendering process.

The BBC discovered that Seaborne Freight, which was awarded a contract worth £13.8m, had never actually run a ferry service.

In its report, the committee said: “Prior to the previous planned departure date of 29 March, we had raised concerns with a number of departments about the rate of progress with the preparations.

“With little lead time left, the Department for Transport undertook a rushed and risky procurement of additional ferry capacity which opened it to a court challenge from Eurotunnel, which had been excluded from the procurement.”

As part of the settlement, the DfT secured extra capacity with Eurotunnel to keep freight and customers moving between the UK and France after Brexit.

It also ensures that essential medicines will reach the NHS in the event of a no-deal departure.

Eurotunnel also agreed to make improvements to its terminal at Folkestone in Kent.

“The department needs to keep a close eye and ensure that Eurotunnel delivers what is promised,” she said.