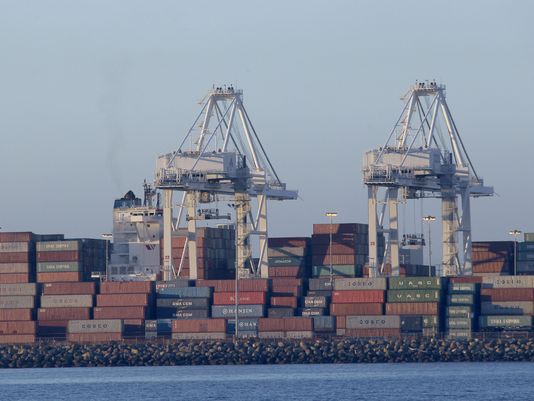 Cargo volumes at the nation’s West Coast ports appear to be making a comeback from a lackluster year in 2015, reporting gains in the first quarter of 2016 and a hopeful improvement on the export side.

At the nation’s largest container port, the Port of Los Angeles, loaded export containers increased 7.6% to 432,092 20-foot equivalent units, a standard measure for container cargo, during the first three months of the year. Loaded import containers were up 8.8% to 1,027,184 TEUs. Empty containers on the export side, which ballooned in 2015, continued the trend, rising 19.4% for January through March in Los Angeles.

Year over year, the month of March saw steep declines compared with March 2015—the result of an unusual surge in container traffic immediately after the West Coast dockworkers’ union and port employers agreed to contract terms in late February of that year after months of protracted negotiations and delays at the ports. January and February of 2015 were uncommonly slow as the negotiations dragged on, but in the first two months of 2016 much of that traffic recovered.

Los Angeles was the second major U.S. port to report March volumes. Last week, the Port of Oakland—a major West Coast hub for U.S. agricultural exports bound for Asia—reported surging export volumes in March and a strong quarterly performance overall. March export volume was up 9.9%, the third straight month of volume gains. For January through March of this year, overall cargo volume at the Port of Oakland was up 18.9% year over year.

Port officials attributed the rise in exports to the recent decline in the strength of the U.S. Dollar, which has made U.S. exports more affordable to overseas consumers. Still, compared with the steadier quarter two years ago, exports through both Los Angeles and Oakland continued to suffer. In Los Angeles, export volumes were down 13% compared with the same quarter in 2014. In Oakland, they were off 9.8%.