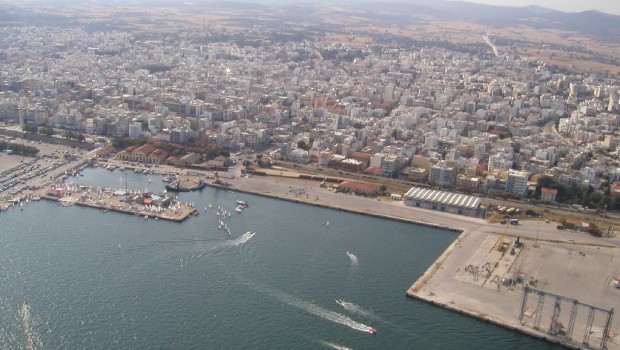 Russia’s state-of-the art frigate Admiral Kasatonov sailed into the port of Piraeus last week along with a number of escort vessels for a working visit, according to a statement by the Russian Embassy on social media. The Russian frigate docked at a Greek port that is controlled by a Chinese state company, just 5 nautical miles from a Greek naval base.

It was not a first either, as naval units from the United States, China, France and other countries have often docked at Piraeus as part of their missions. However, the arrival of the Admiral Gorshkov-class frigate took place at a time when Greece’s ports are becoming a geopolitical and financial playground that has drawn interest from all major powers. Companies from the US, China and Russia, but also from Israel, Italy and Germany, have already set foot in or set their sights on Greek ports, from Alexandroupoli in the north to Iraklio on Crete, and from Igoumenitsa and Astakos in the west to Volos and Kavala in the east and northeast. The US alone is currently seeking a stake in the ports of Igoumenitsa, Kavala and, potentially, Volos via private American companies but with funding from the US International Development Finance Corporation (DFC).

China’s Cosco, meanwhile, has already acquired 51% of Piraeus Port (OLP). Although it seems focused on its primary activity – container handling – Beijing has made no secret the significance it attributes to the economic diplomacy of the New Silk Road initiative in a bid to expand its influence in the Balkans and Europe in general.

In Thessaloniki, two-thirds of the 67% stake is now controlled (after the divestment this week of Deutsche Invest Equity Partners, DIEP) by Belterra Investments, which is owned by Greek-Russian businessman Ivan Savvidis. In an underreported development eight months ago, a clear attempt was made to reach out to the US. According to sources, the overture could signal a gentlemen’s agreement for the ports of northern Greece. US Ambassador Geoffrey Pyatt visited the Thessaloniki Port Authority (OLTH) just a few days after the port project manager at state privatization fund TAIPED was appointed executive president at OLTH. During the meeting, which took place after a visit to the site by the American envoy, the US Embassy issued a statement whereby Pyatt thanked OLTH “for past assistance, including with temporary US military rotations,” and looked forward “to building a culture of transparency and cooperation in areas of mutual interest.” The next few months will show whether the rapprochement between the two sides can placate US skepticism over the entry of the Savvidis group into OLTH or if it could evolve into a partnership, as some market analysts believe.

Two American companies and OLTH are eyeing the port of Alexandroupoli and the Philippos II port in Kavala. Sources at Greece’s Ministry of Shipping, TAIPED as well as OLTH describe OLTH’s participation in these two tenders as a “defensive” move. In other words, they say it is taking part just in order to ensure that should one of the ports not come under the control of US interests it will also not come under the control of an OLTH rival.

Reliable sources did not rule out that OLTH will be invited by the American consortium that may win the tender to undertake a management role in the US vehicle that could prevail in the above-mentioned tenders.

On Igoumenitsa port, also under tender, OLTH appears to be taking a different tack. According to sources claiming to know its plans, the Savvidis Group has a two-pronged strategy. On the one hand, it wants Thessaloniki to become the premier port for the wide Balkan region; on the other, it wants access to the Adriatic Sea, which Igoumenitsa – easily connected to Thessaloniki via the Egnatia Highway – offers. However, there are other important suitors for Igoumenitsa, such as the Grimaldi Group, Attica Group, Greece’s largest passenger shipping group, an alliance of other Greek passenger shippers and a German passenger shipping company with a significant presence in the Adriatic Sea.

The tenders for Alexandroupoli, Igoumenitsa and Philippos II are still in the preliminary assessment phase, which is expected to be completed at the end of February. The second phase will then start, which will last a few months before being completed later this year with the submission of binding offers. “No one knows what will eventually happen in an open highest-bidder tender,” TAIPED officials note.

Diplomacy experts note that Greece is following a multi-pronged strategy partly dictated by the need for strong alliances, given the tension with Turkey, but also the widespread interest in the Eastern Mediterranean as a source of big natural gas reserves and an energy hub, in general. The same sources refer to the same approach to explain recent friction with China’s Cosco in Piraeus, as it presses to expand its activity to containers, a move to which the US and several European governments object.

At the same time, the government is promoting the Mutual Defense Cooperation Agreement (MDCA), through which the US has secured significant access to facilities in Souda Bay and Alexandroupoli.

We should note here that Greece has always and, especially over the past decade, when it has been selling off ports, under both the pressure of its undertakings to the country’s creditors and the need for seriously big investments to upgrade infrastructure, introduced two main safety valves into the agreements of all ports already privatized or under privatization: On the one hand, in order to lease them (always for a finite duration) it demands significant, binding investment in infrastructure in order to maximize the benefit to the economy and ensure that only quality investors apply; on the other, it has inserted into all lease agreements a clause according to which it can refuse access to the port to any ship whose presence it considers detrimental to national interest and security. Finally, it retains a minority interest in most ports and enters into shareholder agreements that limit the investors’ capability to unilaterally make major business decisions. Finally, foreign and Greek business activities at Greek ports have, in recent years, been under the constant careful scrutiny of Greek security and intelligence agencies, those in the know say.

Israel is another potential player in the geopolitics of Greek ports. It encourages talks between Israeli business groups (such as AMPA Capital and Israel Shipyards) and Greece about possibly taking part in tenders, such as the one for Volos’ port, buyouts of other ports, such as Astakos, in western Greece, and Elefsina, near Athens, or alliances with US firms such as ONEX, which controls the shipyard on Syros and is in the running for that of Elefsina. Israel Shipyards has formed a consortium with ONEX to build corvettes; potential buyers are, besides the Hellenic Navy, other allied countries.

The ports of Iraklio and Corfu, now being prepared by TAIPED for lease through international tenders, are separate cases. The Grimaldi Group, which owns local Minoan Lines, is very interested in Iraklio, but so are domestic groups active in the tourism and airline sectors. Recently expressed interest by sea cruise operators appears to have frozen, since cruises have been hit hardest by the pandemic. Thus, Corfu port may not be available soon, since only cruise operators were seriously interested in it.

Patra port, when it becomes available for leasing, is expected to draw the interest of the Attica passenger shipping group, if it does not win the tender for Igoumenitsa. The two ports are considered very competitive on the Adriatic Sea route and are not expected to be leased to the same group, for reasons of fair competition, according to legal sources.

The port of Lavrio, southeast of Athens, is also considered a special case. TAIPED officials see possibilities for a large marina, a cruise terminal and domestic passenger shipping, but there is also interest from companies that want to revive international routes, such as between Greece and Turkey, Greece and Syria and others. A Turkish company is among them. But the Russians are also interested; an urban legend wants Russia interested in Lavrio as a port of call for its navy. This is impossible but indicative of the interest big powers are showing in Greek ports and the care with which the state must navigate among competing interests.