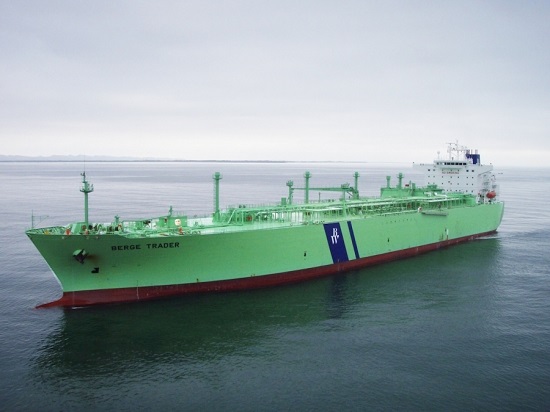 • On 15 April 2016, the Group signed a 12-year debt facility of up to US$220.8 million to provide post-delivery financing for four VLGC newbuilds. The debt has an 18-year amortising profile.

• Two VLGC newbuilds from Hyundai Heavy Industries Co., Ltd were delivered on 20 April 2016 and 11 May 2016. With the delivery of these two VLGCs, the Group has a fleet of 41 vessels, comprising 36 VLGCs and five LGCs, plus six VLGC newbuilds.

• On 27 April 2016, the Group concluded a sale and leaseback agreement for its last VLGC newbuild under construction at Daewoo Shipbuilding and Marine Engineering (“DSME”). Concurrently the Group has also agreed to time charter-in two VLGC newbuilds to be constructed at Mitsubishi Heavy Industries (“MHI”) with deliveries expected in 2020.

PERFORMANCE REVIEW:
Q1 2016 Operating revenue was US$162.6 million in Q1 2016 (US$168.0 million in Q1 2015). TCE income increased to US$136.8 million from US$130.6 million, mainly attributable to the increased fleet size in the VLGC segment and lower bunker costs. These factors resulted in an increase in TCE income of US$5.8 million and US$0.4 million respectively, in the VLGC and LGC segments.

MARKET
Freight Rates & Global LPG Demand VLGC rates averaged US$43,500 per day in the first quarter of 2016, or US$44 per ton on the benchmark Ras Tanura–Chiba route. This roughly equates to a 50% year on year decline on both a daily and per ton basis. Freight rates were adversely impacted in the quarter by narrower geographic LPG price spreads, strong fleet growth and increased availability of in-chartered tonnage in the spot market. Seaborne LPG trade grew by 13% year on year in the first quarter of 2016, led by a 65% increase in Chinese LPG imports and a 25% increase in Korean import volumes. Growth in Chinese and Korean import demand was slightly offset by moderate declines in Japanese and Thai LPG imports.

US seaborne LPG export volumes rose by 48% to approximately 6.5mt in the first quarter of 2016 and accounted for roughly 30% of global LPG trade as propane inventories were drawn down and placed in international markets. Middle Eastern LPG export volumes surpassed the 9mt mark in the first quarter and are thus on pace to experience annualised growth of 4% year on year. US LPG Production & Consumption In its April 2016 Short Term Energy Outlook, the EIA left its 2016 US LPG production and consumption growth forecasts largely unchanged at 2.3% and –1.3%, respectively, leaving net export expectations this year at 25mt. The EIA’s 2017 forecast now calls for production growth of 3.7%, while domestic LPG consumption is poised to decrease by a further 2.9% next year.

In a special hydrocarbon gas liquids supplement released on 16 March 2016, the EIA stated that the main driver of its downward revision to domestic LPG consumption growth was the ability of PDH plants (two online, one entering service in 2017) to ‘produce more propylene per barrel of propane feedstock than an ethylene plant’, and that it also expects ethylene plants to become more reliant on ethane feedstock. Less domestic petrochemical consumption of LPG would be positive for VLGC shipping as it would result in a greater surplus of LPG available for export. However, it is still unclear whether this dedicated-feedstock ethylene (five new ethylene plants, two expansions) and propylene production capacity expansion will displace a portion of the olefin production currently coming from flexible-feedstock ethylene crackers (positive for VLGC freight), or whether it will supplement it and the excess olefin production will then be exported (negative for VLGC freight). This development, along with energy prices, will be the key driver of LPG balances in the US going forward.

VLGC Fleet Growth
The VLGC fleet grew by 10% in the first quarter of 2016 as 19 vessels were delivered in the quarter. Only two VLGCs have been ordered year to date, and BW LPG expects new ordering to remain subdued in 2016 due to lower freight rates and tighter credit availability. Outlook A sustainable oil price recovery will pave the clearest path to a rebound in VLGC rates to median levels. Energy prices must reach a level that will allow US producers to bring hydrocarbons back online without immediately capping prices, which can only happen when global oil demand and supply shifts from surplus to balance.

The correspondent increase in LPG production should then start to re-exert downward pressure on domestic US LPG prices, while naphtha, Far Eastern LPG and olefin prices should trade up alongside oil. Geographic LPG price spreads, the price setting mechanism for VLGC freight in the short term, can then expand and remain sustainably open to support the flow of trade for long enough periods of time to absorb excess shipping capacity and tighten the VLGC market. Concurrently, BW LPG expects continued strong retail demand growth for cooking and heating applications in developing markets.