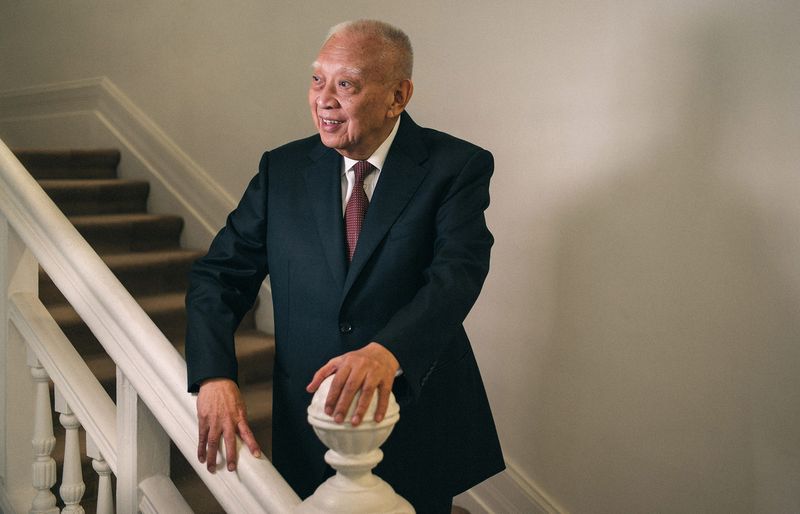 Former Hong Kong Chief Executive Tung Chee-hwa and his family will be about $1 billion richer with the sale of their container shipping line to Cosco Shipping Holdings Co.

Tung’s personal net worth will increase by about $400 million to $2.9 billion, according to the Bloomberg Billionaires Index, based on the $6.3 billion Cosco offered for his family’s Orient Overseas International Ltd. Tung, 80, who was chairman of the business before becoming Hong Kong’s first leader during the British handover of sovereignty in 1997, owns 30 percent of the company.

His younger brother Tung Chee Chen, Orient’s chairman and chief executive officer, holds a 39 percent stake and will boost his wealth by $600 million to about $3.8 billion when the deal is completed. The state-owned shipping giant agreed to pay HK$78.67 for each Orient share, a 31 percent premium over Friday’s closing price. The deal still requires approval from regulators and Cosco investors.

Tung, currently a vice chairman of China’s top political advisory body, Chinese People’s Political Consultative Conference, was handpicked by Beijing in 1997 for the top job in the financial hub and has been advising the central leadership on foreign policy, especially China-U.S. relations.

The Tung family, which founded Orient Overseas Container Line in 1969, ran into financial trouble in the 1980s and needed more than $100 million in additional funding that was arranged by Henry Fok, a pro-Beijing property tycoon. Fok, who died in 2006, also played a key role in Beijing’s selection of Tung as Hong Kong’s first leader under Chinese rule.