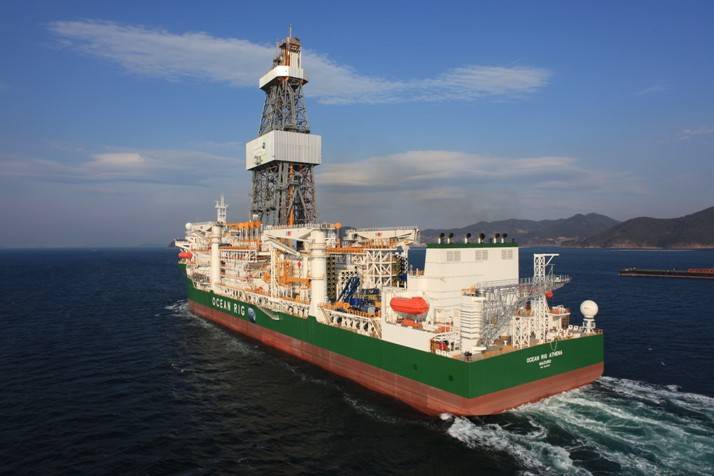 Ocean Rig has repurchased a principal amount of USD268.1 million of the senior unsecured notes due in 2019 and USD156.3 million of the senior secured notes due in 2017. The purchase prices were not disclosed but the resulting gain to the company of USD173.5 million implies a material discount to par. Moody’s considers the transaction as a distressed exchange for the senior secured notes and the senior unsecured notes, which Moody’s views as a default. As noted above, Moody’s has appended the /LD indicator to the Caa2-PD PDR to reflect the limited default; the /LD indicator will be removed after three business days.

Today’s rating action reflects Moody’s view that the current leverage is high relative to current business conditions, with an untenable capital structure if current conditions persist, coupled with an expectation that the company could carry further debt buybacks at a discount to par which could again be classified as a distressed exchange.

Furthermore, whilst the debt buy-back will slightly improves the company’s credit metrics through lower outstanding gross debt and interest burden going forward, it does not alleviate the increased liquidity pressures that the company will face over the next two years since the net discount achieved on 2017 debt is outweighed by the cash used to purchase 2019 maturities. Although Ocean Rig’s liquidity is adequate for the next 12 to 18 months, Moody’s expects liquidity pressure from the unfunded newbuild capex in late 2016 and first half 2017, refinancing risk associated with the October 2017 maturity of the secured notes and tightening covenant headroom that year. The company needs to pay for a newbuild rig (the Ocean Rig Santorini), to be delivered in June 2017, and for which there is not yet a financing in place as well as refinance or repay the remaining USD644 million secured notes maturing in October 2017. Whilst the company managed to issue USD200 million of equity in June 2015, Moody’s cautions that the company’s ability to access the capital markets could become constrained due to the strong negative trends in the offshore drilling industry, which will remain deeply entrenched through 2017.

Moody’s anticipates the company’s credit metrics will deteriorate in 2016 and 2017 as the majority of the company’s rigs will roll-off contract over the next two years. These rigs will either be stacked if no employment is found or in the best case, re-contracted at significantly lower day-rates. Sustained weaknesses in crude prices and a steady supply of newbuilds will depress day-rates and create significant stress on the sector. As of 30 September 2015 and pro-forma for the debt buy-back, the company’s Moody’s-adjusted leverage stood at 4.6x.

More positively, the ratings reflect: (1) the strong USD3.8 billion contract backlog as of 1 December 2015, with 100% and 75% of calendar days under contract in the remaining 2015 and full year 2016 respectively, (2) the young and technologically advanced fleet, with all drillships built within the last five years, and (3) recent industry leading operating performance with quarterly contracted operating efficiency of 95% or above over the last twelve months and improved fleet average operating expenses.

The negative outlook reflects the company’s untenable capital structure, and the weak offshore drilling environment and the uncertainty regarding the duration of this downturn which could severely stress the company’s liquidity profile.

The rating could be downgraded if the aforementioned liquidity pressures are not addressed and/or the company’s fleet operational efficiency materially deteriorates. Conversely, the rating could be upgraded if the aforementioned liquidity pressures are resolved and the fleet operates at high levels of utilization resulting in a sustainable capital structure. Any potential upgrade would most likely be dependent on an improvement of market conditions.