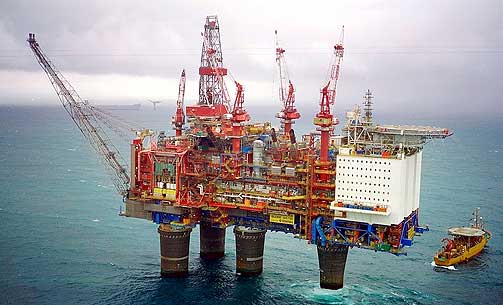 The stateâ€™s oil income is on track to dip to the lowest in at least six years.

Net income from the Norwayâ€™s direct stakes in offshore oil and gas fields for the first nine months is 13 percent behind the same period last year and barring a substantial rally in the last three months could dip below the 97 billion kroner received in 2009, data from state oil company Petoro showed on Tuesday. The drop comes even as production has increased 10 percent in the first three quarters, showing the impact of lower prices.

The income â€œwill be significantly lower than last year,â€ Grethe Moen, Petoroâ€™s chief executive officer, said in a phone interview. She declined to give a more precise forecast.

Western Europeâ€™s biggest oil producer is struggling to withstand a plunge in oil prices thatâ€™s led companies such as Statoil ASA to cut investments and jobs. The government plans to next year also dip into its massive $860 billion wealth fund for the first time to cover budget needs.

The state also gets oil revenue via taxes on production from other companies that operate off Norway and from dividends from Statoil. The state-controlled company last week reported a net loss and said it was deepening spending cuts to keep up dividend payments.

Petoro predicts this yearâ€™s net cash flow to the state to exceed the governmentâ€™s own forecast of 84 billion kroner, thanks to higher production, Moen said. â€œI would really hope so, absolutely,â€ she said.

While Petoro hasnâ€™t seen any â€œunhealthy cutsâ€ in maintenance work, the importance of less downtime has grown because of lower prices, Moen said.

â€œRevision halts are being delayed and the revision cycle is being changed,â€ she said. â€œIncentives for that have grown. If you do that, youâ€™ll increase production.â€