Taking The Road To The Future With Natural Gas? Natural gas is set to account for an increasing share of the global energy mix in coming years, with gas consumption growing by an average of around 1.5%-2% a year out to 2040, according to energy forecasting agencies such as the IEA. And based on recent trends, if the consensus views on natural gas prove accurate, the implications for the offshore and LNG carrier fleets are likely to be significant.

Stepping On The Pedal

In 2016, global natural gas demand stood at an estimated 347bn cfd, up by 24% on the 280bn cfd consumed in 2006. Demand for natural gas in recent years has been driven by industrialisation in developing economies (Chinese gas demand, for example, grew at a CAGR of 13% in 2006-16) and environmental concerns the world over. Historically, the majority of trade in natural gas has been by pipeline, for instance from Eurasia to Europe. In 2015, pipelines still accounted for 68% of natural gas volumes moved globally.

However, liquefied natural gas (LNG) has become an increasingly important form in which gas is traded, even given the costs of complex liquefaction and regasification facilities. Over 50% of existing nameplate liquefaction capacity at LNG export terminals (349mtpa globally) has come online since 2005. As a corollary, from start 2006 to start March 2017, the LNG carrier fleet increased from 193 to 479 vessels and tripled in total capacity to 70.2m cubic metres of LNG.

Shifting It Up A Gear

Growth in the seaborne LNG trade is in turn closely linked with growth in offshore gas production, as major LNG exporters such as Qatar and more recently Australia use offshore gas fields to provide feedstock to LNG trains. Qatar accounted for 30% of LNG exports and 22% of existing liquefaction capacity in 2016, all fed via offshore gas, mostly from the giant North Field. In 2006, offshore fields accounted for 28% of global gas production and by 2016, 31%. This is set to rise to 32% (119bn cfd) in 2017, mainly due to field start-ups off Australia that are to feed LNG projects like Wheatstone. Finding, developing and supporting offshore gas fields on Australia’s NW Shelf has created demand for a range of vessels from the offshore fleet of over 13,500 units.

More Gas In The Tank

The exploitation of these remote reserves has also spawned the FLNG concept – vessels that can be used to exploit otherwise stranded gas. The LNG markets are clearly challenged at present but in the long term, planned FLNG projects in Australia, Mozambique, Tanzania, Mauritania and other areas could potentially sustain offshore gas production growth. Another major source of gas production growth has been the US shale gas sector, where production rose from 4bn cfd in 2007 to 48bn cfd in 2016. The US accounts for over 50% of liquefaction capacity under construction (while some planned projects entail liquefaction of shale gas on near-shore FLNGs) and is set to become a major LNG exporter in coming years.

So offshore gas production has grown as a share of total global gas production, as has US shale gas. Both trends can create opportunities for LNG and offshore vessels. And if, in line with consensus expectations, gas continues to grow as a share of the energy mix, then these trends may have a long and interesting road ahead. 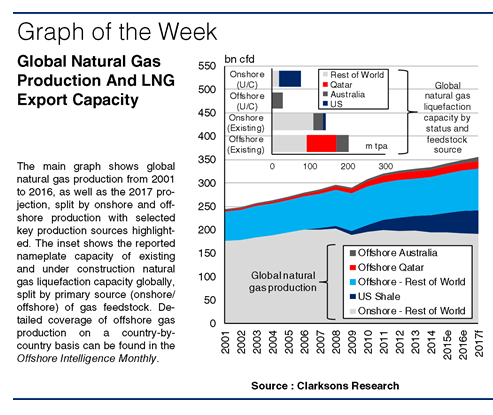