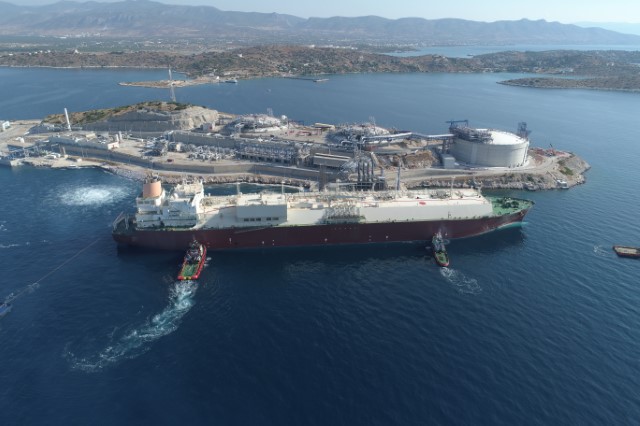 On the islet of Revithoussa near Athens, Greece’s only liquefied natural gas (LNG) terminal station is operating at full capacity. The country has boosted LNG’s share in its energy mix since the onset of the energy crisis to protect households and businesses from blackouts.

For Greece, the rocketing cost of energy rather than supply security is the biggest challenge, as the country has made steps to diversify its energy sources.

Currently, natural gas has a 30 percent share in Greece’s energy mix, equal to renewables, and the rest is oil and lignite, Michalis Mathioulakis, academic director at the Athens-based Greek Energy Forum think tank, told Xinhua in a recent interview.

“Now the big difference in the gas department is that we have switched to almost 50 percent of our gas consumption coming from LNG, while this used to be down to 20-25 percent. This is a major difference after last year and the energy crisis,” he said.

Managed by the Hellenic Gas Transmission System Operator S.A. (DESFA), the Revithoussa LNG terminal is about to become the main natural gas entry point into the country in 2022.

Nikos Katsis, asset management division director at DESFA, told Xinhua during a recent tour of Revithoussa that the terminal’s utilization has increased in recent years.

“In 2021, 32 percent of the volume consumed in the Greek market were regasified at Revithoussa. By August this year, this figure went up to 44 percent.”

Since its inauguration in 2000, the terminal has received LNG from 16 different countries. This year, 60 percent of the 50-odd shipments came from the United States, with Algeria being the second largest source, he said.

In order to respond to increased demand, in August this year the DESFA leased a floating storage unit (FSU), Katsis said. An LNG carrier with a capacity of 150,000 cubic meters of LNG is now docked next to Revithoussa’s three storage tanks.

“Just like elsewhere in Europe, households in Greece are increasingly worried about their energy bills,” said Mathioulakis, who is also an energy strategy analyst at the University of Macedonia in northern Greece.

Natural gas prices increased by 261.3 percent in August this year compared to the same period in 2021, and the respective figure for electricity prices was 38.5 percent, according to the latest official data provided by the Hellenic Statistical Authority (ELSTAT).

ELSTAT attributes the bulk of the 11.4 percent increase in the annual inflation rate in August to the rise in energy costs. The Greek inflation rate hit a 30-year record of 12.1 percent in June.

The Greek government has adopted a series of measures to support the country’s consumers. To date, it has allocated 9.8 billion euros (9.4 billion U.S. dollars) to subsidize the electricity and natural gas bills of households and businesses, Greek Finance Minister Christos Staikouras told Parliament last week.

However, Mathioulakis said that the bills are still 60-70 percent higher than last year. “This is a big problem.”

Andreas Kondylis, mayor of Alimos, a suburb of Athens, told Xinhua that society as a whole has been affected by the high energy prices.

“People are extremely troubled, extremely anxious and under pressure financially by the high energy prices. State aid has given them breathing room, but they still find it hard to deal with the rising cost of living,” Kondylis said.

“We need to see this as a market problem and not as a geopolitical problem and try to solve it that way,” Mathioulakis said.