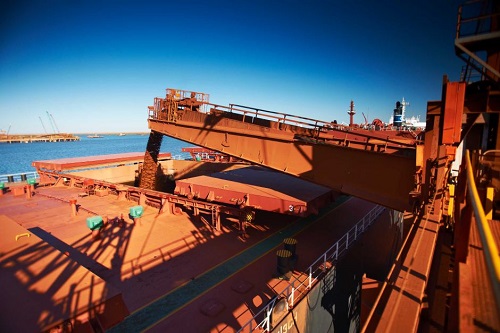 The outlook for iron ore prices has soured as China slashed steel production, one of its largest property developers fears and the country advanced its work to decarbonize its economy.

Iron ore prices plummeted through August, falling about $100 per tonne to as low as $94/t by mid-September for S&P Global IODEX 62% Fe and near $100/t for NYMEX 62% Fe after China called for caps on steel output as it sought to cool prices in metal markets and decrease pollution from the steel industry. They had traded at over $200/t until late July in part due to strong Chinese steel production in the first half of the year amid economic growth of 12.7% in China.

“We’re going to see prices struggle and go back to around the $100/t level,” said Tom Price, head of commodity strategies at Liberum Capital, commenting on fourth-quarter expectations.

S&P Global Market Intelligence dropped its fourth-quarter forecast to $110/t from an earlier forecast of $145/t.

Prices could slide further as iron ore output typically increases in the back half of the year, Cecil said.

With lower Chinese iron ore demand in play, Cecil said pricing risk is to the downside. Liberum’s Price holds the same view, seeing iron ore prices in the $90/t range over the next few months as possible.

As for 2022, analysts said they largely expect prices in the low $100/t range to persist, though iron ore supply shocks could add to volatility.

“It’s a tricky one,” Cecil said on forecasting next year.

One added factor that could weigh on Chinese steel output next year is the 2022 Beijing Winter Olympics set to be held in February. During major events like the Olympics, China often curbs industrial production to improve air quality.

While China’s steel sector curbs may remain in place, Price also noted steel producers typically restock in the early part of the year and that could buoy prices in the first quarter.

“I’m expecting the old seasonal upswing to play out and that’ll probably offer a bit of relief to the companies at the top end of the cost curve,” Price said.

Next year could also see China loosen its grip on the steel sector. Credit Suisse analyst Matthew Hope noted in a Sept. 28 research report that China continues to rapidly urbanize, while infrastructure expansion remains a core part of its latest five-year plan.

“We expect Beijing may have to drive infrastructure hard next year to reach five-year targets, and that should help steel demand,” Hope said.

Market Intelligence forecasts 2022 iron ore prices at an average of $115/t, but there could be gyrations in the market. Major miners are largely not expanding production, leading to tight supplies. Iron ore prices could jump if supply disruptions emerge, Cecil said, pointing to project delays due to environmental, social and governance issues and interruptions at iron ore operations and shipping hubs due to bad weather.

“It wouldn’t take much on the supply side to cause another spike in prices,” Cecil said.

With iron ore prices in the $100/t range, analysts doubt major iron ore miners like BHP Group, Rio Tinto Group, Fortescue Metals Group Ltd. and Vale SA will cut supply as they continue to generate profits around that mark. But they see higher-cost producers in China curbing output where the cost of production is about $100/t.

“They would be in a world of pain at the moment,” said Price, referring to domestic Chinese iron ore operations and some small operations in Australia.