HomeFinance & EconomyBraemar sees strong trading in second half of the year

Braemar sees strong trading in second half of the year 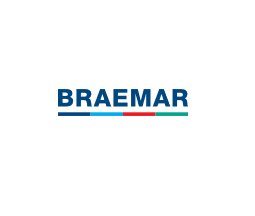 Braemar Shipping Services, a leading international Shipbroker and provider of expert advice in shipping investment, chartering, risk management and logistics services, issued an update on trading and other matters.

Trading update
The strong trading seen in the first half of the financial year has continued throughout the second half to date. Revenues* for the year ended 28 February 2022 are now expected to be not less than £101m (2021: £84m).

This strong performance reflects favourable market conditions and, more importantly, the investments we have made in increasing the breadth, focus and depth of the Group’s shipbroking activities. Of note, a volatile Dry Cargo market has helped us increase both revenue and market share on the physical and securities desks. The Sale and Purchase desk has concluded a significantly higher number of transactions, largely due to the strong Dry Cargo market, but also due to the synergies gained from closer collaboration with the Financial Division on containers. Tanker market rates have remained low, impacted by pandemic related weakness in oil demand. However, Tanker transaction volumes have increased by more than 25% compared to the previous year, aided by strategic hires, including the previously announced Clean Products hires in Geneva.

The Group’s employee reward arrangements are also being changed in respect of the current and future years, as described below, with the consequence that an additional cash bonus of £2.8m will be charged to profits in the current year. The proposed changes should however positively impact reported profitability in future years as the charge to profitability of the deferred equity is similarly reduced. The Group expects underlying operating profit* for the year to 28 February 2022 to be circa £9.8m (28 February 2021: £7.7m).

Proposed changes to employee reward arrangements
In order to better align shareholder and employee interests and support the Group’s successful growth agenda, the Board has concluded that it should reduce the overall amount of deferred equity issued annually as part of employee remuneration arrangements.

Under the current scheme, deferred shares have been awarded and issued to employed recipients over a three-year vesting period and generally settled by shares purchased in the market. Whilst this scheme will remain unchanged, the amount paid in such deferred shares will be halved with an increase in cash bonuses paid of the same amount. This will also apply in future years and will involve claw back arrangements on the additional cash payments in order to encourage employees to remain in Braemar’s employment.

Disposal of Cory Brothers
Good progress is being made on the disposal of Cory Brothers, the Group’s non-core Logistics Division, which is expected to be concluded over the next few weeks. The disposal, however, is no longer expected to be by way of a joint venture but rather an outright disposal for a combination of upfront cash and deferred payments based on a three year earn out.

The financial performance of Cory Brothers remains in line with previous guidance but is not included in the above numbers. Moreover, Cory Brothers’ trading for the year will be included in the Company’s full year results as ‘discontinued operations’ due to the planned disposal of the business.

Proposed Board change
Braemar announces that Lesley Watkins, Audit Committee Chair, will resign from the board with effect from 31 March 2022 in order to be able to take on another non-executive role.

Braemar is pleased to announce that Joanne Lake will succeed Lesley. Joanne will be appointed to the board as a non-executive director with effect from 1 March 2022 and will become Audit Committee Chair with effect from 1 April 2022. Joanne will also join the Remuneration and Nomination Committees from 1 March 2022. Elizabeth Gooch will succeed Lesley in the role of senior independent director from 1 April 2022.

Nigel Payne, Braemar’s Chairman commented: “Lesley was appointed a non-executive director in June 2017 and became Audit Committee Chair later that year. We are very grateful for Lesley’s significant contribution to the group. We have particularly valued her governance, risk, and regulatory knowledge and experience of working with listed companies. We wish her the very best for the future.”

“We are delighted to welcome Joanne to the board. Joanne is a chartered accountant with a strong financial and City background and brings a wealth of experience to the board and will be a tremendous asset to the Group as we further our growth agenda.”

There is nothing further to disclose pursuant to Listing Rule 9.6.13 in respect of Joanne Lake.