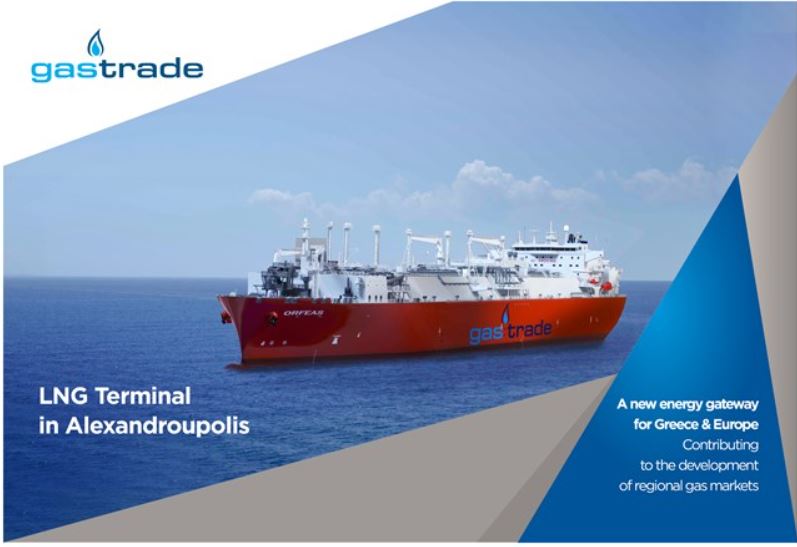 The Final Investment Decision (FID) for the construction of the Independent Natural Gas System (INGS) of Alexandroupolis was taken by the shareholders of Gastrade SA. The FID is the last and most important milestone, before entering the project’s construction phase.

The General Assembly unanimously approved that all requirements for the materialization of the project have been secured, and the project is on track in line with its schedule.

The construction and operation of the Alexandroupolis Liquefied Natural Gas (LNG) Terminal will contribute to the energy security, liquidity and diversification of the country and the entire Southeastern Europe region, strengthening the strategic role of Greece and offering alternative sources and routes for the supply of natural gas in the area.

The Floating Storage and Regasification Unit (FSRU), with a capacity of 153,500 sq.m. of LNG, will be connected to the National Natural Gas Transmission System of Greece with a 28 km long pipeline, through which the gasified LNG will be transmitted to the markets of Greece, Bulgaria and the wider region, from Romania, Serbia and North Macedonia, as all the way to Moldova and Ukraine.

The Terminal is expected to operate by the end of 2023, with the contracted regasification capacity already reaching up to 50% of it’s technical capacity of 5.5 billion sq.m. per year. It is noted that Alexandroupolis INGS is included and financed by the Operational Program of the NSRF “Competitiveness, Entrepreneurship and Innovation 2014-2020” (EPAnEK), with an amount of public spending of 166.7 million Euros.

The Founding Shareholder and Chairperson of the Board of Directors of Gastrade, Ms. Elmina Copelouzou, stated: “The Final Investment Decision opens a new, important chapter in the energy security of the country and Southeastern Europe. We are particularly happy that Gastrade has undertaken a critical project that is a priority for the European Union. Alexandroupolis INGS will be adding to the security of the energy supply, diversifying the energy routes and contributing to the development of competition to the benefit of the final consumers”. While Mr. Konstantinos Sifnaios, Vice President and Managing Director of Gastrade, emphasized “A strategic project for the region is now reaching the stage of implementation. We are really proud of this achievement and confident that Gastrade’s human resources coupled, with the know-how and support of its shareholders, will make the vision for a new, innovative energy entry gate in our country, a reality”.

The representative of Gaslog Cyprus Investments Ltd, Mr. Paolo Enoizi, stated that “GasLog invested and supported the work from the very beginning and we are especially delighted that we reached today’s outcome. This work matters greatly to us since GasLog not only participates in the shareholders’ composition of Gastrade, but also, following the successful completion of the relevant competitive procedure, GasLog will be undertaking the conversion of one of our fleet vessels to FSRU, which will subsequently be transferred to Gastrade at the end of 2023. Furthermore, GasLog will be undertaking the operation and maintenance FSRU, ensuring via its expertise the supply of high level of services to the users of the Station. This pluralistic role of our company to this work provides us with a special motive for its success, and we are looking forward to secure a new, contemporary and adequately functioning entrance portal of LNG for Greece and the SE Europe”.

The Chairman of DEPA Commercial S.A, Mr. Ioannis Papadopoulos and the CEO, Mr. Konstantinos Xifaras, made the following joint statement: “The current energy crisis highlights the strategic importance of the investment and the materialization of Alexandroupolis INGS , not just for Greece, but for the wider Europe in general. A new entry gate of energy supply is being created, which will be upgrading dramatically our country’s place in the SE energy map”.

The CEO of Bulgartransgaz EAD, Mr. Vladimir Malinov, also mentioned the importance of the decision, noting that…”The unanimous final investment decision-making by all shareholders is a key moment in proceeding with the actual construction of the liquefied natural gas terminal in Alexandroupolis, Greece.” This is what the Executive Director of the Bulgarian gas transmission operator Bulgartransgaz EAD, Mr. Vladimir Malinov said during the General meeting of Shareholders held in Athens. “The participation of the Bulgarian state through Bulgartransgaz EAD, as a shareholder in the project, will contribute to strengthening natural gas market in the region of Southeast Europe. Access to alternative natural gas supplies, also from the United States, Egypt, Qatar and others, to Bulgaria and the neighbouring countries will ensure competitive prices in natural gas market. The growing liquidity through access to liquefied natural gas will accelerate the process of decarbonization in Bulgaria,” added Mr. Malinov.

The CEO of DESFA S.A, Mrs. Maria Rita Galli, stated to the shareholders: “Today’s Final Investment Decision for the Alexandroupolis FSRU marks the beginning of an emblematic project that will play a key role in strengthening Greece’s energy security and will further establish the country’s leading position in regional energy developments. With the implementation of this strategically important project, and its interconnection via DESFA’s NNGTS to the existing and new export routes to Bulgaria and North Macedonia, Greece will further emerge as and energy hub for the area, enhancing gas exports to the markets of Southeastern and Central Europe, increasing diversification of supply sources and substantially contributing to the energy transition of Greece and the wider region. Committed to the development of a critical energy infrastructure, DESFA will contribute with a top-notch know-how and the long experience gained from the operation of the Revithoussa LNG terminal to the optimal design and excellent implementation of the Alexandroupolis FSRU.”.