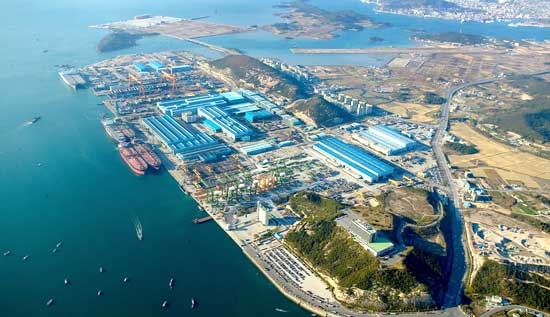 Minority shareholders of Korea Shipbuilding & Offshore Engineering (KSOE) are furious after the company reaffirmed its earlier plan to go public with one of its subsidiaries, Hyundai Samho Heavy Industries, this year, according to industry analysts.

The shareholders saw the KSOE stock prices plunge when another subsidiary, Hyundai Heavy Industries, was listed on the main KOSPI last September.

According to a report from Daishin Securities, KSOE Vice Chairman and CEO Ka Sam-hyun told local securities analysts Tuesday that Hyundai Samho will go public as planned, despite the recent failure in its attempt to acquire Daewoo Shipbuilding & Marine Engineering.

“When IMM Private Equity invested 400 billion won ($335 million) in Hyundai Samho, we promised to list the company on the stock market until 2022, but we deferred the deadline for two years,” the vice chairman was quoted as saying. “The initial public offering (IPO) is a fulfillment of our promise for IMM that helped us during the shipbuilding industry’s slump, so Hyundai Samho’s IPO will go ahead as planned.”

Hi Investment & Securities analyst Lee Sang-heon said in a report earlier this month that a subsidiary’s IPO can cause a discount on its parent firm’s stock price, damaging minority shareholders.

“If Hyundai Samho’s IPO follows Hyundai Heavy’s IPO, the discount rate may be even greater,” analyst Choi Gwang-sik of the securities firm also said in another report.

A recent fatal accident at Hyundai Samho involving an irregular worker is also weighing on the shipbuilder and its parent firm.

A day after the KSOE vice chairman announced Hyundai Samho’s IPO plan, a female worker in her 50s died at the shipbuilder’s shipyard in Yeongam, South Jeolla Province. She reportedly fell from a ladder while doing cleaning work.

The accident occurred only a week before the enforcement of the Serious Accident Punishment Act, which states that the owner or chief manager of a business can face a minimum one-year prison term or a maximum fine of 1 billion won, if an industrial accident involving a death occurs when a workplace doesn’t take the required safety measures. The Ministry of Employment and Labor started investigating the accident to find out whether the shipbuilder breached safety guidelines.

“We will intensively manage risk factors to prevent the recurrence of accidents threatening the safety of workers,” Hyundai Samho CEO Kim Hyung-kwan said in his written apology after the accident.

In terms of rating the environmental, social and corporate governance (ESG) factors that have become significant for domestic and foreign institutional investors when making investment decisions, a worker’s death is considered a negative social factor.

When the Korea Corporate Governance Service downgraded KSOE’s social rating during the second and third quarters of last year, the proxy adviser cited a series of fatal accidents that had occurred repeatedly at Hyundai Heavy’s shipyard.