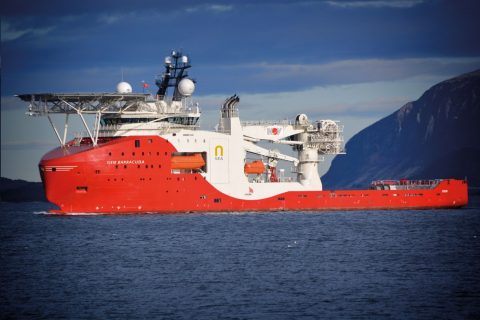 Siem Offshore Inc (SIOFF) announced a plan for a re-domiciliation of the company whereby a new Norwegian holding company will be established for the SIOFF group.

The board has decided to propose to shareholders the re-domiciliation by way of Siem Renewables AS making a share-for-share offer for all the outstanding shares in SIOFF (the “Offer”). Siem Renewables AS is currently an empty company indirectly owned by Siem Industries S.A. As part of the process, Siem Renewables AS will be converted into a public limited liability company and change its name to Siem Sustainable Energy ASA (“SSE”). If the Offer is successful, SIOFF will become a subsidiary of SSE, in which case it will be the intention to de-list SIOFF from the Oslo Stock Exchange. SSE will apply for a listing on the Oslo Stock Exchange as part of the process.

The contemplated new group structure will pursue new operations aimed at the energy sector, including renewable energy. The intention is that SIOFF’s existing business, with a fleet mainly deployed in the oil and gas sector, will be continued in SIOFF while new renewable energy related business will be developed in a separate subsidiary owned by SSE.

The composition of the board in SSE will reflect continuity and the management in SSE will be the same as in SIOFF today.

The Offer is expected to be subject to customary conditions, including: (i) Valid acceptance of the Offer by no less than 95% of the outstanding shares in SIOFF (ii) SSE being admitted to listing on the Oslo Stock Exchange. (iii) Any required consents under the existing financing agreements of the SIOFF group

SSE will reserve the right to waive the conditions to the Offer, including by way of reducing the acceptance level condition.

Upon completion of the Offer, in respect of 95% or more of the shares in SIOFF, the intention is to carry out a squeeze-out of the remaining outstanding shares in SIOFF. SSE has secured commitments of an equity issue of up to NOK 80 million to finance a squeeze-out.

Shareholders representing approx. 38% of the shares in SIOFF have expressed their support of the Offer.

The Offer will be made on the basis of a combined offer document and listing prospectus. The document will be subject to the approval of the Oslo Stock Exchange as an offer document pursuant to the rules of chapter 6 of the Norwegian Securities Trading Act and the approval of the Norwegian Financial Supervisory Authority as a prospectus pursuant to the EU Prospectus Regulation.

The company seeks to complete the re-domiciliation during the first half of 2022.