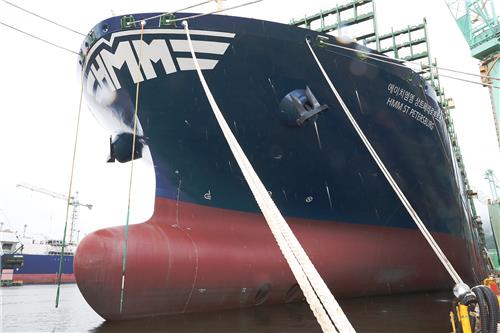 The worst of an ongoing union struggle is over as HMM, the country’s leading maritime shipping company, came to a last minute agreement with its labor union over wages, Thursday, 77 days after negotiations began.

HMM President Bae Jae-hoon met with land based workers’ union leader Kim Jin-man and sea based workers’ union leader Jun Chung-geun, Wednesday, and came to an agreement following marathon talks to a 7.9 percent increase in wages and a bonus payment equivalent to 650 percent of monthly pay, the company said. The two sides also agreed to a 2.7 percent rise in welfare benefits.

“We entered negotiations with a burden of being responsible for 99.7 percent of exports within the marine shipping industry,” Jun Chung-geun, chairman of the sea based workers’ union said.

The agreement has substantial meaning as the threat of worker strikes raised worries over further bottlenecks to global shipping supply chains which have already been combating rising costs and a shortage of containers. Market analysts had worried that a strike would have a huge impact on technology and auto supply chains in addition to bottlenecks at major ports due to COVID-19 restrictions.

Labor and management representatives started negotiations on June 18, but had difficulty in terms of narrowing prerequisites and key conditions required for a settlement. The two unions voted for a strike to pressure management to address the wage dispute.

At the land based union, 98 percent of its 755 members supported striking if the negotiations fell through, while 92 percent of the sea based union also voted in favor of a strike to resolve the wage dispute.

Initially, management proposed an 8 percent pay raise, with a bonus equivalent to 300 percent of their monthly wages and 200 percent incentive at the end of the year. But the unionized workers refused.

“We apologize to the public as the negotiations were prolonged raising worries of possible logistics disturbance. Both the management and the union have eased their stances and came to a consensus considering the economic effect and the coronavirus situation,” an HMM official said. “Through the wage negotiations, management and the union will join hands to rebuild the local marine shipping industry.”

Despite the agreement helping the global shipping industry avoid possible turmoil, investors did not react positively as HMM’s stock price fell by 4.05 percent to close at 40,300 won on Thursday.

Because supply chains are massively affected by even partial disruptions, investors said a strike will hit stocks of HMM’s business alliances. In a comparison, earlier closures at Chinese ports this year had a substantial impact on international trade with a shipping gridlock prolonging supply chain disruptions throughout the next year.

“We cannot stand and watch the rising concerns over logistics disturbance,” Kim Jin-man, chairman of the land based workers’ union said. HMM is the only large marine shipper in Korea after Hanjin Shipping went bankrupt in 2017 and a strike would have dealt a devastating blow to local exporters.

“Even though management agreed to the union’s request of raising rates by 25 percent and bonuses of 1,200 percent, it would have cost the company an additional 120 billion won, which is just 1 percent of expected sales for this year, so it would have a limited impact on corporate value,” Na Min-sik, analyst at eBest Investment & Securities said.

HMM reported a record operating profit of 2.4 trillion won for the first six months of this year from 136.7 billion a year earlier. Its revenue almost doubled to 5.3 trillion won during the same period.